Mubarak Law In the News

Nayef Mubarak in the News 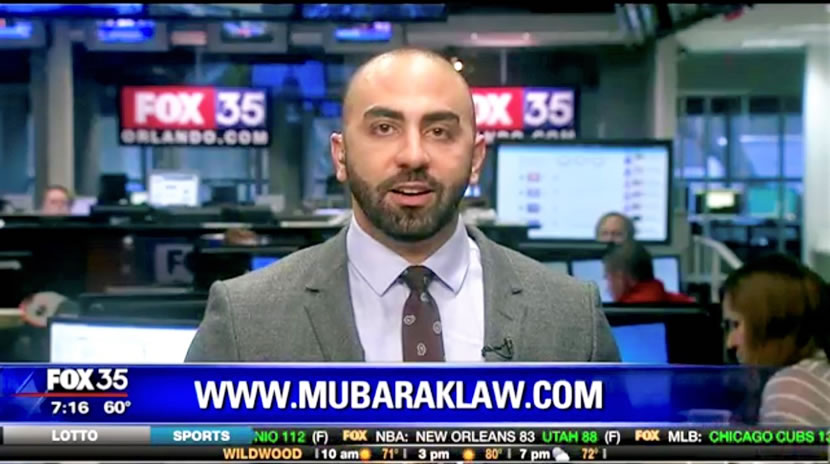 Sheriff: Members of Haitian Special Olympics delegation go missing in Osceola County
Six members of the Haitian Special Olympics USA Games delegation have gone missing, officials with the Osceola County Sheriff’s Office said Tuesday. The individuals were in the U.S. for the soccer competition, investigators said. They were last seen at about 2:30 p.m. in the area of the ESPN Wide World of Sports Complex, a press release from the Sheriff’s Office said...

Long lines outside of Orlando immigration office as hundreds try to get appointments
Hundreds of people were forced to wait for hours in long lines outside of Orlando's immigration office this week as the office struggled to keep up with all of its appointments. It's been like this for more than a week since Immigration and Customs Enforcement resumed its Enforcement and Removal Operation with the lifting of COVID-19 safety protocols...

Biden's Review of Charge Rule Could Lead to Lighter Load on Food Banks
Executive orders issued by President Joe Biden this week could mean changes to the public charge rule enacted during the Trump administration. Under the current rule, an immigrant who uses Supplemental Nutrition Assistance Program (SNAP) benefits, or food stamps, as a public charge...

Central Florida Immigrants are Hopeful Biden Proposal Will Lead to Full Citizenship
In his first week in office, President Joe Biden is proposing a sweeping immigration bill called the U.S. Citizenship Act of 2021 that would create an eight-year pathway to citizenship for undocumented immigrants...

DACA Restored, But Central Florida Undocumented Immigrants Still Worry
After three years of legal battles, young undocumented immigrants are again able to file new DACA applications, a relief to many in Central Florida who were denied the chance of deportation protection...

40 Under 40: Immigration attorney Nayef Mubarak is growing his firm during the pandemic
Nayef Ahmad Mubarak pulled off a big accomplishment in February when his law firm nearly tripled its office space. A month later, however, the pandemic disrupted the upward trajectory of Orlando-based full-service immigration law firm Mubarak Law...

Legal Florida Immigrants Seeking Citizenship Eye Election Day Results
Over the past four years, the Trump Administration has made changes to immigration policy, making it more difficult for legal residents to become U.S. citizens. Former-Vice President Joe Biden plans to roll back many of those executive orders and actions on immigration if elected.

The Cost of Applying for U.S. Citizenship is Increasing (With Video)
With concerns about underfunding, the U.S. Citizenship and Immigration Services made adjustments to its fees to cover its operating costs. However, those increases will mean it's will be more expensive to become a citizen in the United States.

Trump Administration Freezes Visa; Impacts Certain Foreign Workers (With Video)
The Trump Administration’s latest visa freeze went into effect on Wednesday, which will impact certain foreign workers. It will impact foreign workers who try to enter the U.S. with a H-1B, H2-B (seasonal non-agricultural jobs) H4, J and L. The executive order will temporarily ban approval for those visas for the rest of the year.

Impact of Trump administration's military deportation protection (Video)
Orlando Immigration attorney Nayef Mubarak talks to Channel 9 News about how the Trump's Administration is expected to scale back a program that gives families of active military service members who came to the US illegally protection from deportation. The beneficiaries are “paroled” for the purposes of applying for a green card under the Immigration and Nationality Act (INA).

Life After Separation
As he buttons his U.S. Marine Corps uniform, Sebastian Gil wears a sense of pride with a deep belonging to his country; the same country that deported his family. His parents, Cecilia Clavijo and John Gil, brought in 2016 their three children, Sebastian, Amattiel and Mateo to the U.S. on tourist visas and overstayed the three months allowed by their visas.

Senate Hits Immigration Deadlock on DACA dreamers (Video)
Unable to find an acceptable middle ground on DACA, the faith of millions of undocumented immigrants known as "dreamers" is hanging on the balance. DACA deadline is March 5th. Orlando Immigration Attorney Nayef Mubarak talks to WFTV Channel 9 and comments on the issue.

Mubarak Law
“BUILD A WALL!” “MUSLIM BAN!” “IMMIGRATION REFORM!”  These statements have been at the center of what is likely the most chaotic political climate to enter the world of U.S. immigration law in decades; however, Attorney Nayef A. Mubarak is cool, calm, and collected.

Newest travel ban worries Central Florida Muslims
Ibtihal Ibrahim was hoping that she had heard the last of President Donald Trump’s travel ban singling out Muslim-majority countries when it was struck down in court. But now that a modified version has gone into effect, she said she is sad that her relatives in Sudan — and people in all six countries — may not have the chance she had to come to America.

Mixed Reactions Pouring In Following President Trump's New Immigration Order (Video)
Attorney Nayef Mubarak talks to Fox 35 News about some of the inconsistencies of the new travel ban set to go into effect March 16, including the removal of Iraq from the list.

Nayef Mubarak Goes In Depth On Trump's Immigration Policy (Video)
Attorney Nayef Mubarak talks to Cheryn Stone from Channel 13 News and goes In Depth about President Trump's Immigration Policy. Mr. Mubarak talks about the announcement of the increase on the number of border patrol agents, and about new agreements to try to create a broader enforcement agency.

Travel Ban Under Trump Administration: 109 People Detained Over the Weekend, including a Syrian Couple with visas detained in Orlando after trying to visit son (Video)
Attorney Nayef Mubarak with Mubarak Law talks to CNN about a Christian couple with valid visas who came to visit their son and were detained for over 8 hours at Orlando International Airport.

Central Floridians Held at Airport After Travel Ban: Executive order causes confusion (With Video)
From the local airports to the port, families were left in limbo this weekend as they waited for their loved ones to be released following President Donald Trump's executive order. Protesters gathered outside of Orlando International Airport Sunday chanting against the ban, while one Iranian woman, Negin Alimohammadi, reunited with her family. Orlando Immigration attorney Nayef Mubarak was there.