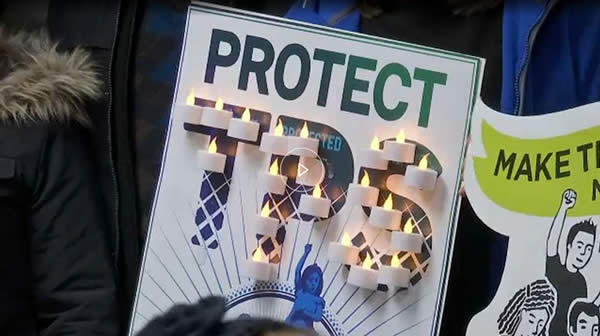 The future of more than 300,000 immigrants remain in the balance after a federal appeals court opened the door to deport some with Temporary Protected Status last month.

TPS is granted to immigrants whose countries become unsafe for them to live in.

Destin has lived in the U.S. for 20 years. She said the first 10 she lived here illegally.

“I tried to survive with my family,” Destin said.

In 2010, the earthquake in Haiti opened the doors for her to apply for Temporary Protected Status meaning she’s protected from deportation, can apply for a driver’s license and find better paying jobs.

“It was a blessing for us [to receive TPS],” Destin said.

In 2018, the Trump administration set to end TPS for holders in El Salvador, Nicaragua, Sudan and Haiti, which led to lawsuits and eventually a California judge issuing an injunction.

According to a study by Center for American Progress, in Florida there are more than 4,000 TPS holders from El Salvador and more than 32,000 from Haiti.

“One of the biggest arguments made was the administration changed the way it viewed TPS,” Nayef Mubarak an Orlando immigration lawyer said.

Last month, on September 14, once again Destin said the fear of deportation loomed. A panel of the 9th U.S. Circuit Court of Appeals ruled 2 to 1 to lift the injunction when they concluded a San Francisco judge made the wrong decision to block the Trump administration’s move to phase out TPS for those four countries.

“When I heard that terrible decision, I was shocked,” Destin said.

Judge Consuelo Callahan stated in the opinion that, “The panel concluded that Plaintiffs’ claim was unreviewable in light of 8 U.S.C. § 1254a(b)(5)(A), which states: 'There is no judicial review of any determination of the [Secretary of Homeland Security] with respect to the designation, or termination or extension of a designation, of a foreign state under this subsection.'”

“I don’t know what’s going to happen to my family, to my kids,” Destin said.

More than 300,000 TPS holders like Destin could be deported next year. Destin is worried her U.S. born children would need to choose between living without their mother or leaving their country.

“It’s a shame my kids have to go through this because they’re U.S. citizens,” Destin said. “They deserve the right to be with their parents.”

A New York federal judge injunction could help Destin and other Haitians stay in the U.S. a little longer.