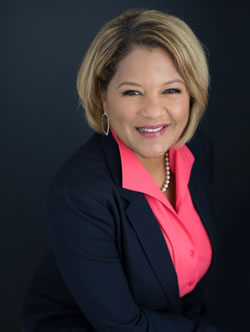 Gloria Solorzano de Lopez, born in Caracas-Venezuela, studied at La Universidad Central de Venezuela and earned a B.S. degree in Computer Science. Mrs. de Lopez has been working with immigration attorneys as a legal assistant since she arrived in the United States of America in 2005.  After a career in computing and bank auditing, Mrs. de Lopez determined that cold world surrounding auditing and computing systems was not her passion. Mrs. de Lopez had a calling to interact with people, listen to their needs, and the passion to help them. By the end of 2005, a wonderful door was opened for her and Mrs. de Lopez arrived in the United States, settling in the state of Florida. Mrs. de Lopez started working in a law firm where she discovered an interest in the U.S. legal immigration system.

Since then, Mrs. de Lopez has been acquiring knowledge into the larger world of the immigration laws, supporting those who have emigrated to the United States of America from around the world. Mrs. de Lopez loves interacting with individuals who have different cultures, languages, beliefs and life goals. In 2012, attorney Mubarak offered Mrs. de Lopez the position to be his legal assistant at a prestigious downtown Orlando firm. After 4 years, Mrs. De Lopez was offered to join Attorney Mubarak on his new venture, Mubarak Law. By the end of 2016, both began to lay the project’s foundation, sharing the same values and principles which have always been displayed in their work. They committed to fulfilling the daily goal and their main priority, the future of every immigrant.  Nowadays, along with new members of the Mubarak Law team, they work tirelessly to achieve the goals of Mubarak Law, which are the goals of their clients’.

Gloria has assisted handling the following types of cases:

During her years as an immigration legal assistant, Gloria Solorzano de Lopez has known many stories of immigrants in the United States. By being one of them, Mrs. de Lopez has understood their concerns, sorrows and aspirations. She often says, “Many stories, some being harder than others, many with happy endings and some will mark you for life.”

About Our Legal Team