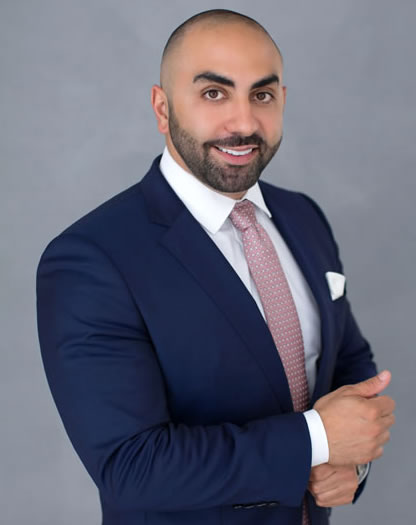 Nayef A. Mubarak is a lifelong resident of Central Florida.  He earned his bachelor’s degree from the University of Central Florida.  Prior to enrolling in law school, Mr. Mubarak spent time working as a mutual fund accountant with the Bank of New York.  Nayef speaks Arabic, English, and Spanish.

Attorney Mubarak was admitted to the Florida Bar in 2010.  Prior to opening his own office, he was a partner at a well-known Orlando firm.  In August 2016, Nayef founded Mubarak Law. Mubarak Law is a full-service immigration and personal injury law firm.  Nayef’s practice focuses on investor visas, waivers, employment and family-based petitions.

Nayef was invited to the White House in 2013 for “Strategy Meeting with Arab-American Community Leaders” to discuss immigration reform.  Nayef served as the chair of the Immigration & Naturalization Executive Committee for the Orange County Bar Association (2020) In 2019, Mr. Mubarak was elected as the Orlando Regional Vice-Chair of the American Immigration Lawyers Association (AILA), he held this position for a second year until 2021.  He has appeared on numerous local and national news outlets as a legal analyst for immigration law. Nayef was listed as one of Orlando’s 40 top executives under 40 by the Orlando Business Journal in 2020. He is currently serving as Chair of the ICE-Liaison committee of AILA CFC.