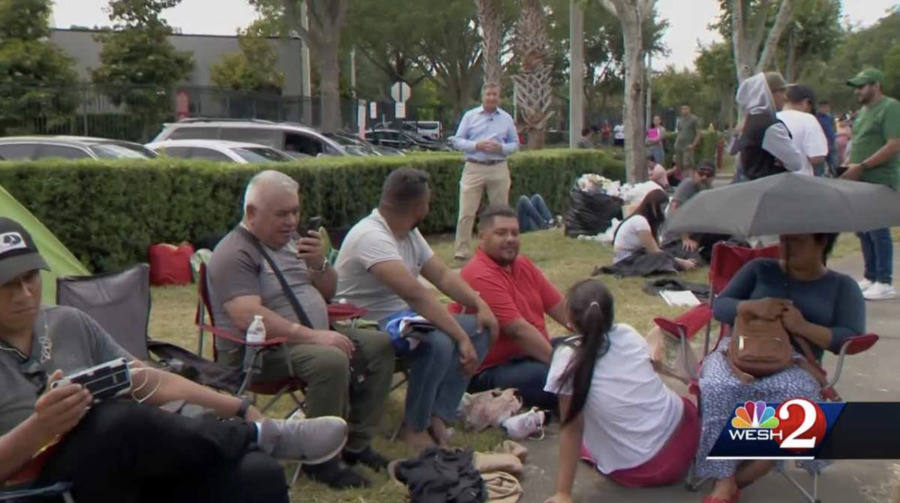 ORLANDO, Fla. — Hundreds of people were forced to wait for hours in long lines outside of Orlando's immigration office this week as the office struggled to keep up with all of its appointments.

It's been like this for more than a week since Immigration and Customs Enforcement resumed its Enforcement and Removal Operation with the lifting of COVID-19 safety protocols.

WESH spoke with one woman Friday morning who stood in line every day this week just to get into the appointment she was required to attend.

Lopez stood in line outside of Orlando's immigration office for the fifth day in a row.

She told us she's never seen it so busy.

Lopez immigrated to the US from Guatemala five years ago.

Part of her immigration process includes a mandatory meeting with officials at this building once a year. But this year, she hasn't been able to get in.

Every day Lopez has shown up, there have been dozens, sometimes even hundreds of other people here too.

She says no one from the office has given her any information. They just tell her to keep waiting in line.

But Suseli has two young children at home, including an 8-month-old baby.

So every day she's forced to stand for hours in the hot Florida sun while her children are at home without their mother.

She said it's very sad because we're all immigrants. We're all equal.

Lopez's story isn't unique. WESH spoke with several people who were forced to wait in line. They all said they were required to be there and were frustrated the office didn't seem to have the resources to get them all in.

“These people want to make a better living in this country and they're being treated like animals,” Cuban-American Alejandro Rodriguez said.

Rodriguez is a U.S. Marine and immigrant trying to help his Cuban friends and others outside the immigration office in Orlando to get appointments vital to their cases.

Most of the people have received letters saying they have to report or potentially face deportation or detention, but the office staff is overwhelmed.

“To have people standing here, living here, basically, they are living here, are they going to start asking for rent too? …People have been here since last week and nobody says anything,” Rodriguez said.

Some have been in tents for several days or arriving before sunrise to try and get in.

Sandra Naral is an immigrant who says she’s been camping out for two days.

The reasons they are here vary: people seeking asylum, working on their core process for citizenship, non-permanent residents trying to obtain or extend work permits. But all must report.

“You know in over 12 years of practicing, I've never seen tents or people camping out to check in at ERO,” immigration attorney Nayef Mubarak said.

Mubarak is the liaison to the Orlando ERO for the American Immigration Lawyers Association. He says some of these people are his desperate clients.

“They're trying to comply with their legal requirements of checking in, and many people, it affects their ability to obtain work permits or fear being deported if they don't make it to their appointment,” Mubarak said.

The crowd was much larger until the office announced it would not let any more people through the door on Thursday and so many of them left.

There's no place nearby to get water and no bathrooms. Immigration attorneys say it's likely to get worse before it gets better.

John Gihon is an immigration attorney who used to work in the Orlando ERO.

He says the office was only designed to handle about 100 people a week, not the crush of people who received notice to show up or possibly face detention or deportation.

“So as we get into next year and the year after we will be able to help with these visa issues and it will also help us resolve our workforce shortage,” Soto said.

WESH received this statement from Immigration and Customs Enforcement: "Noncitizens must appearin person for their initial ICE appointment. And non-citizens who were apprehended by U.S Customs and Border Protection are encouraged to look at the ICE Check-in criteria, and make an appointment using the ICE Appointment Scheduler.”