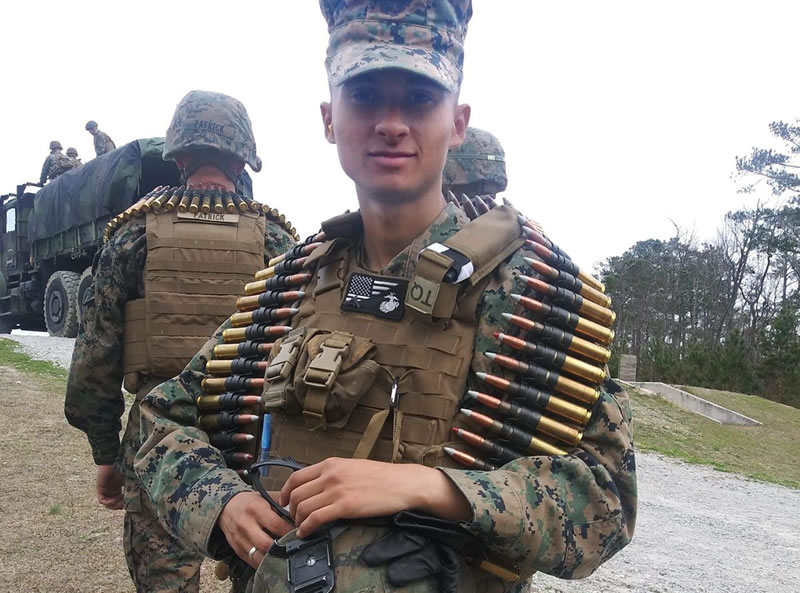 As he buttons his U.S. Marine Corps uniform, Sebastian Gil wears a sense of pride with a deep belonging to his country; the same country that deported his family.

His parents, Cecilia Clavijo and John Gil, brought in 2016 their three children, Sebastian, Amattiel and Mateo to the U.S. on tourist visas and overstayed the three months allowed by their visas. They settled into a new home, adopted a dog and enrolled their children in school. They continued to build their lives in the U.S., knowing their visas had expired.

In February 2017 his family was questioned and detained while driving to a park at the beach, and eventually deported to Spain. Sebastian, the only U.S. citizen in his family, was at home at the time.

Sebastian remained in South Florida while his family awaited deportation from separate detention centers. Friends and strangers gave him food and a place to stay while he finished high school in Hollywood, Fla. He thought about enlisting in the military following graduation. His parents and siblings were placed on a flight to Spain in March 2017. He was alone. He told his recruiter he wanted to join the Marines as soon as possible.

Sebastian Gil graduated from McArthur High School in 2017 after his family was deported. (Courtesy Sebastian Gil) 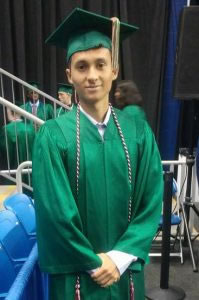 Adjusting to the first few days of boot camp was challenging for Sebastian, but he eventually found routine in the military.

Describing himself as skinny and weak, “I went in with little expectations,” he said.

English is not his first language, but he is comfortable speaking it and his military duties and work have helped him improve his English.

He said the transition into the Marine Corps was rough, but he can’t complain — he has a job, home and food.

In his spare time, he plays video games and reads. He’s reading a military ethics book and hopes to learn enough to get promoted.

His days are long, beginning at 4 a.m. He completes an hour of physical training and takes college classes for graphic design. Outside of work and school, when their schedules align, Sebastian talks to his family on the phone or via video chat.

Sebastian’s family adjusted to their new life in Valencia, Spain — a stark difference from South Florida — but life in Spain was not unfamiliar to them. They had lived there before after leaving their home in Columbia in search of work and better education.

A year after their deportation, they moved to London. Cecilia and her husband John started work as custodians. They commute over an hour by bus five days a week to get to their jobs. The children talk to their older brother on the phone on weekends. They have not seen each other in over two years, but hope to reunite in the U.S.

Being separated from his family for so long is hard, but Sebastian looks forward to starting his own family.

“Right now, honestly it is difficult to be motivated,” he said. “I miss every single detail like my friends, I have a fiancée. All those things.”

Sebastian and his fiancée, Mayra Mendoza, have been engaged for three months. She lives in Peru. He talks to her on the phone during his lunch breaks. They plan to marry when she graduates from college in January, after which they will move into military housing for families in North Carolina.

Mayra will apply for a green card and eventually permanent residency. Sebastian said President Donald Trump’s immigration policies make moving to the U.S. more difficult for immigrants, but he understands them, despite his family’s experience.

“He is trying to improve the country,” Sebastian said. “Even though I was affected personally.”

One of the options Sebastian and his fiancée can apply for is called Parole in Place. The program grants immigrants in the U.S. who are family members of military personnel the opportunity to extend their stay and work in the U.S.

But, the policy does not guarantee family of military personnel permission to remain in the U.S. In some cases, immigrants married to American citizens are unable to adjust status or get a green card because of one of three factors: how they entered the country, the type of visa they have or a previous deportation, said Nayef Mubarak, an immigration attorney in Orlando.

“Parole in Place is a way to cure these immigration hurdles and allow them to remain in the United States,” Mubarak said. “It cures a lot of issues but I cannot say it cures all. But it does protect that person from deportation at least for the time it is granted… and give them a right to work.”

Once parole is granted, it’s only good for up to 18 months. Renewals are allowed and can be a nerve-wracking experience, Mubarak said.

Mubarak advises anyone looking into applying for parole in place to speak with an attorney.

“With this administration, everything is kind of more difficult,” Mubarak said. “But they are still granting some of these cases.”

For now, Sebastian takes everything one day at a time. “After the two more years I have here, I plan to reenlist,” he said. “I like the military. So, I am going to strive to make a life here.”