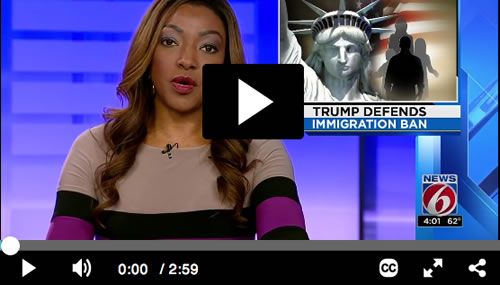 ORLANDO, Fla. - From the local airports to the port, families were left in limbo this weekend as they waited for their loved ones to be released following President Donald Trump's executive order.

Protesters gathered outside of Orlando International Airport Sunday chanting against the ban, while one Iranian woman, Negin Alimohammadi, reunited with her family.

"I mean, she has a physical green card and she went to school here, she works here and was very fearful she was not going to be able to return to her job and life and career here in the US," Mubarak said.

Mubarak was at the airport after he got a phone call another couple, Abdulrazzak Habbabeh, 59, and Mary Safar, 58, were being held. They were traveling to visit their son Elias Hebbabeh, who lives in Palm Coast. He hasn't seen his parents in years.

"They weren't scared but they were saying, 'You are either going to stay or leave'," Elias Hebbabeh said Sunday night. "They are not coming here to stay they are just coming here to visit. I mean, they are not here as refugees. They don't want nothing for nobody, you know, they just want to come visit me and go back."

Mubarak said Hebabbeh is a green card holder and filed all the paperwork correctly and legally to get his family here last November.

"He has a right to have his parents here and he went through the necessary steps. He pays taxes he became a naturalized citizen. These are Christians, too. These are people who [President Trump] wants here and they were still at risk of not being allowed in."

After nine long hours, all three people who were held at OIA were released.

Attorney Mario Musil said there were also seven families held at Port Canaveral following a cruise; however, they were all eventually released as well.

On Monday, Mubarak said one Brazilian resident of Syrian descent was held for a few hours on a tourist visa Monday but eventually released. Airport officials told News 6 they had no record of that and no protests planned for the foreseeable future.

"I think the executive order needs to be clarified as to who we allow in, what's happening and how it's being implemented," Mubarak said.

The Department of Homeland Security did offer some clarification Sunday night, saying those with green cards will be permitted into the U.S. as long as they don't pose a threat.