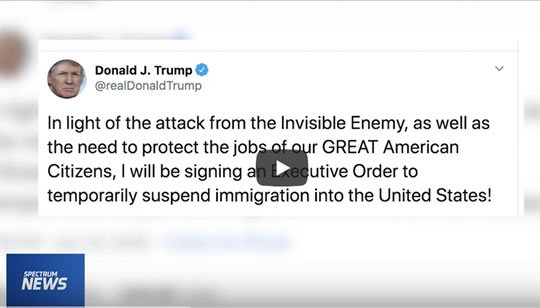 Trump first made the announcement on Twitter on Monday night and said he would sign an executive order to temporarily suspend immigration because of the coronavirus pandemic.

In a statement, Trump's campaign said the suspension will achieve two goals: protect the health and safety of Americans and to safeguard the economy.

So far, the Trump administration has not provided details how it would be implemented.

"Many people are concerned that immigration, known as United States Citizenship and Immigration Services, is going to stop processing those applications."

Mubarak said much of the fear stems from the U.S. Supreme Court upholding the Trump administration's travel ban two years ago.

“I do know there will be challenges," Mubarak said. "Immigration attorneys like ourselves are already discussing filing lawsuits and injunctions, and the federal courts are likely to file injunctions to dispute whether or not this is a constitutional act."

U.S. Rep. Stephanie Murphy's office said she is monitoring the issue and will push Trump to make sure policy decisions are based on science and expert advice.