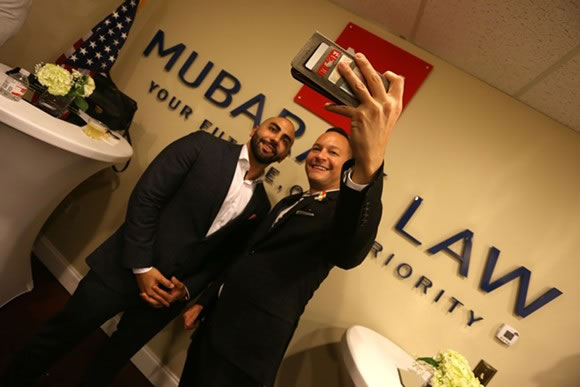 If Donald Trump goes through with his campaign promises, his presidential administration will bring with it a different set of immigration policies. With that in mind, Mubarak Law, a new immigration firm in downtown Orlando, is ready to meet that challenge.

Attorney Nayef Mubarak, the firm's founder, says he originally wanted to be an entertainment lawyer while studying at the Barry University School of Law, but he changed his mind after he participated in an immigration clinic for indigent clients and won a case for a Haitian couple seeking asylum from political persecution. After specializing in immigration cases at NeJame Law firm for six years, Mubarak decided to open his own firm to continue to focus on clients who need help regarding asylum, business visas, investment visas, deportation defense, employment-based visas and family petitions.

While President Barack Obama has deported more people than any other previous administration, Trump promised during his campaign to build a wall across the U.S.-Mexico border and rescind Obama's executive order on Deferred Action for Childhood Arrivals (DACA), which gives undocumented immigrants brought here as children the ability to work legally without the fear of deportation. Mubarak says reversing that order could put about 750,000 people, often referred to as "Dreamers," out of the work force. Mubarak adds that some DACA recipients are also worried about being deported, given that the federal government has their personal information, including where they live.

"We tell our clients this is a country of due process," he says. "They can't deport you overnight without a right to hearing and court case. If they know they have a right to a court case, they're not going to be taken in the middle of the night and physically removed. Most deporting cases take two years to go through."

Mubarak says he wanted to continue his line of work by opening more offices to help people with immigration problems in Miami or New York.

"There is going to be a drastic change in immigration, and we want our clients to be prepared," he says.