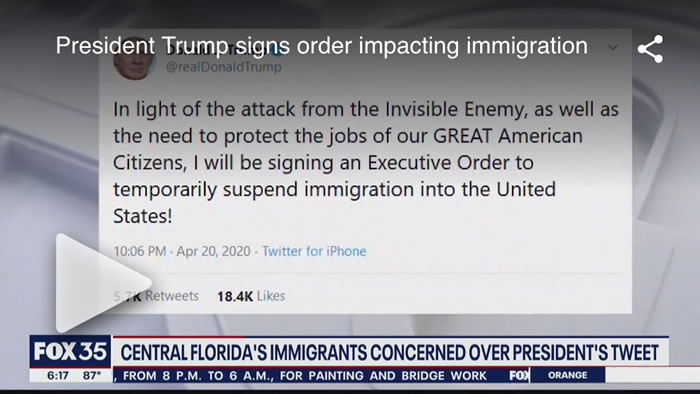 President Trump signs order impacting immigration
Central Florida's immigrants are concerned over a tweet from President Trump to temporarily suspend immigration into the United States due to the COVID-19 pandemic.

"We've gotten calls from our clients in London or people from South Africa who are, 'am I gonna be able to come back?' 'what should I do?' 'what's going to happen with our case?'" said immigration attorney Nayef Mubarak. "I think it's probably a lot of our clients' worst nightmare."

However, Mubarak said Tuesday that the answers to those questions are scarce, because right now all he has is that Tweet to go off of.

As of Tuesday afternoon, no official wording of the executive order had been released and the White House wasn’t offering up any further details on what immigration programs would be effected or how.

"A Tweet comes out from the President and they don't know if their mom is going to get their visa, if their investor visa's going to go through,” said Mubarak.

Mubarak, and many experts Tuesday theorized that the order will likely be similar to the temporary travel bans ordered by the President throughout the Covid-19 crisis. Many also expect that this order too will be faced by legal challenges.

That’s why Mubarak is urging clients to stay calm for now.

"I would say, try not to panic yet until we see it. I think there will be a lot of challenges if there is an executive order about the constitutionality of it and many of the federal courts will file injunctions,” he said.

Attorneys hope a final draft of that executive order will come out in the next few days so they can give their clients more direction on how to proceed.